NEW YORK, NY, May 12, 2015 – Former New York City Mayor Rudy Giuliani met Tuesday with 10 Israeli soldiers who were wounded in Operation Protective Edge last summer and told them that he hopes Congress stops President Obama’s nuclear pact with Iran, a country he said was led by a man who “appears to be insane and wants to destroy the state of Israel.”

Mayor Giuliani also told the soldiers on their last day of a 10-day visit to New York City arranged by the Chabad Israel Center of the Upper East Side nonprofit Belev Echad (With One Heart) that the United States and Israel are fighting a common enemy in Hamas and Islamic extremist terrorists.

“I would not make a deal with Iran,” he said. “I don’t believe in making a deal with a government that’s run by a person who appears to be insane. He has continually all throughout our negotiations said he wants to destroy the state of Israel so what’s the point of making peace? What’s the point of making a deal on nuclear capacity with a country that’s run by a man who wants to destroy the state of Israel? There’s something about that I don’t get and it’s deeply disturbing and I hope the United States Congress who I know have tremendous doubts about what the President is doing … is able to stop it.”

At the end of his meeting with the soldiers, including Ohad Ben-Ishay, one of the most seriously wounded in the Israel-Gaza conflict,Giuliani took a photo with the soldiers and texted it to Israeli Prime Minister Bibi Netanyahu.  Then with a little assistance from Belev Echad Founder Rabbi Uriel Vigler, who runs the nonprofit with his wife Shevy, he texted “With #belevechad wounded IDF soldiers. (Lubavitcher) Rebbe called them Metsuyanei Tzahal (special IDF soldiers).” 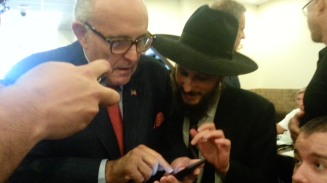 Giuliani repeatedly told the soldiers how much Americans admire and appreciate their service to their country, one of America’s “greatest allies,” which he said helps defend the United States against terrorism as well. “We’re both fighting, America and Israel, the same terrorists, the same ideas about Jihad and because of Israel I think the United States gets a lot of help and a lot of support. We learn a lot about security … Hamas is an enemy of the United States also. Thank you very, very much for what you’re doing because by defending Israel you’re also defending America,” he said at a breakfast meeting at a midtown Manhattan kosher restaurant.

“I loved meeting Mayor Giuliani,” said injured soldier Roei Amir, 21. “For me he symbolizes the fight on terror. He was the mayor on 9/11 and he knows what it means to fight terror. I loved the trip to New York and I loved meeting people here.”

During the 10-day visit, the soldiers also toured the Ground Zero Museum & Memorial, the Statue of Liberty and Ellis Island, saw a Broadway show and visited many other famous city sites. They also enjoyed a surprise visit to Washington DC after a Belev Echad supporter generously donated a plane for the day. On Monday night, back in New York City, conservative political commentator, talk radio personality and author Monica Crowley and award-winning investigative journalist Richard Behar expressed gratitude and appreciation for the soldiers’ sacrifices at an Evening of Recognition attended by some 200 supporters.

“Thank you for your many selfless sacrifices to fight for freedom, for justice, for what is right,” said Crowley. “Thank you for risking your lives so that freedom will triumph over tyranny and terror.”

Belev Echad also orchestrated an emotional surprise reunion for Ben-Ishay with his army captain Rani Azulay at the event, bringing many to tears. It was the first time Azulay had seen Ben-Ishay since shortly after he was critically wounded on the second day of the fighting last July. Ben-Ishay was in a coma for two months and doctors didn’t know if he would survive after shrapnel lodged in his brain. He is now paralyzed on his right side, can’t speak, read, write or walk, but does understand a great deal and made clear he was thrilled about the reunion.

Behar, who has written for Forbes, Time and Fortune, told the gathering that he and fellow investigative reporter Gary Weiss have launched a nonprofit venture “which will be multimedia, multilingual, multinational – and will tell the truth about Gaza, the PA (Palestinian Authority), Iran, anti-Semitism, the growing Islamist threat and terrorism financing.  We’ve been doing it already in investigative pieces exposing the leaders of the academic BDS movement, as well as exposing the journalists – by name, we expose them by name … who are lazy, sloppy, superficial and biased in their reporting about the Israeli-Palestinian conflict.”

He also said the injured Israeli soldiers were a testament to a statement from retired British Col. Richard Kemp, who had served as commander of British forces in Afghanistan, that the ‘IDF has taken greater steps than any other army in the history of warfare to minimize harm to civilians in a combat zone.’”

Founded in New York City in 2009, Belev Echad established a global initiative to honor wounded Israeli veterans who have risked their lives and limbs to protect the Jewish people and ensure the security of Israel through a system of love, support and education. Through programs for wounded soldiers, career counseling, scholarship funds and social and educational events, Belev Echad makes a small, but meaningful contribution toward repaying the soldiers for their service.

In a recent interview with Al Jazeera America, former CIA Director James Woolsey warns that the United States needs to realize it’s at war with “theocratic, totalitarian, genocidal imperialists” in ISIS and accuses President Obama of behaving “positively Chamberlin-esque,” much like the Europeans did in failing to stand up to Hitler in the years leading up to World War II.

Have to admit I agree and I was thinking the very same thing! ISIS is an extraordinarly dangerous enemy that knows no boundaries and its declared goal is turning the entire world into an Islamic caliphate and barbarically murdering anyone who doesn’t immediately convert to Islam. There can be no appeasing such an enemy and the world must join together to defeat ISIS before it’s too late!!!

Woolsey also accuses Russian President Vladimir Putin of acting much like the Nazis did in the 1930s in its military aggression against Ukraine.  In an except not featured in this clip posted on the Al Jazeera website, Woolsey says, “I think we have to begin to think of Russia  much the way we thought of them during the Cold War. Putin is behaving very much, except for there’s no Holocaust as far as we know, very much the way Hitler did between 1933 and 1939; he’s grabbing Europe a bit at a time and that’s exactly what the Nazis did.”

On the issue of ISIS, Woolsey says,  “This is a group not of just thugs or robbers; these are theocratic, totalitarian genocidal imperialists. They are establishing an empire, a caliphate and anybody who is part of it or lives within its borders and does not convert to their view of religion, they kill and sometimes horribly by burying families alive or by crucifixion and so I think that the first thing we have to do is acknowledge and understand that we’re at war. We’ve been attacked by a totalitarian regime and we have to deal with them accordingly.”

The United States has to take the threat of ISIS “as seriously as we eventually took our major wars,” he says. “So far  I think the President and the U.S. as a whole basically have been behaving somewhat like the Europeans in the 1930s, between 1933 and 1939, just before World War II. We’re being positively Chamerblin-esque in our conduct.” Woolsey was interviewed prior to President Obama’s Sept. 10 address to the nation on his strategy to “degrade and ultimately destroy” ISIS.

He says among the steps the U.S. needs to take is helping the Kurds with military capability, taking a very tough stance with Qatar to prevent wealthy Qataris from continuing to send weapons and money to ISIS, and figuring out how to pull the Sunni tribes “together into a coherent group the way we did back in ’07, ’08 when we put the surge together. I think we need to all this without putting big American units in but a few CIA people, a few special forces people to help the people who are with us get organized, I think we can do that.”

Asked whether fighting against ISIS would wind up helping brutal Syrian President Bashar al-Assad hold onto power, Woolsey says, “It’s a very big dilemma and you rightly point to it. We had a similar kind of dilemma in the beginning of World War II and we eventually decided to ally with Stalin against Hitler and it’s a good thing that we did because as awful as Stalin was, we were still only able to pull out a victory in World War II because we had worked together with him even for a time. I’m not saying we ought to try to work together with Assad but if we happen to be going against the same people and some of the same groups such as ISIS or others then I think that’s just the way the dice falls in that particular play.”